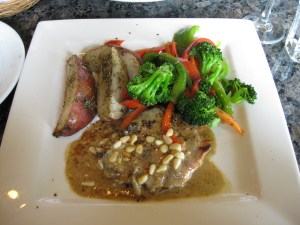 My mother-in-law announced recently that she wanted to take the family out to dinner and could I make it so. Yesterday was one of those days when all the schedules lined up for a dinner outing that would allow us all to linger a bit and celebrate the good things from the day. Time to execute the request. I picked Zola’s because MIL had been there a few years ago and quite liked it. Plus it used to be our ‘go to’ place when we lived WAY west and a stop in there on the way home from work seemed more appealing than labouring over decisions at the nearby Loblaws. And I mean we went there ALOT. I think our son was likely 3 at the time we started that habit. And now here we are some 15 years later and still coming back. Just no where near as often.

Inside we were greeted by ‘our’ waitress. She is a fixture there and it seems that she has always been our server. So pleasant. Imagine her surprise to see our son a towering 6’4″ now. We had quite the reunion, as it has been a few years. In a way we felt like we had gone back home. I was disappointed to see that there were so few customers for a Thursday evening. In the good old days we were dead without a reservation. Has modern Italian cuisine gone out of favour in Bells Corners? 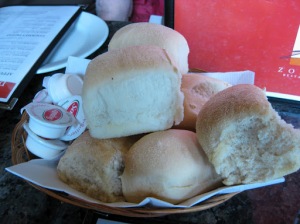 Their buns are a real standout. They are baked fresh every day with the finest Semolina flour and they are available in white or whole wheat. 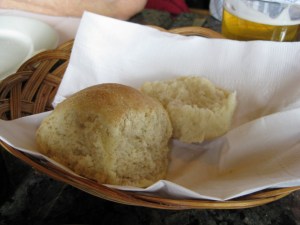 Our hungry son was the only one going for an appetizer. And it is the one he always chooses. Their Caesar Salad with an eggless dressing of lemon, dijon, capers, anchovies, olive oil with croutons and freshly grated parmesan cheese. No amount of coaxing would garner me a taste, as he assumed a very guard-like posture while he ate. I remember it as tasting very ‘fresh’ of lemon, garlic and cheese. One of my favourite places for Caesar Salad in the city.

And predictably, I ordered my standard chicken with gorgonzola cream sauce topped with pine nuts and served with vegetables and roast potatoes. I just love that punchy cream sauce. It matches so well with the toasted pine nuts. I also like that it comes with copious vegetables to ease my guilt on the sauce. I am guessing they are partially steamed and then quickly tossed in the pan. There is not a lot of extra flavour there. And maybe naked veggies are a good thing. One thing that has changed (or so I think) is the potatoes. I recalled them being smaller and more ‘roasted’. These potatoes were too heavily seasoned in a dry herb mix and I ended up leaving them after a few bites. 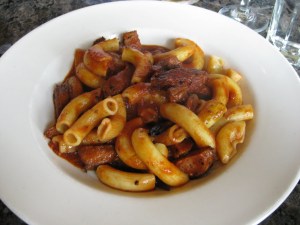 Our son also ordered his ‘regular’ dish. Penne with pan seared calabrese sausage in a spicy tomato sauce. I managed to sneak a piece of meat and it was spicy! Not a bad tasting sausage. Other than that, I can’t reveal much about the penne.

And then the other two ordered the same. Whole wheat angel hair pasta with mushrooms, scallops, shrimp and spinach in a light Pernod broth. They enjoyed it well enough but no ‘wow’.

Having just been to Caffé Mio a week ago, it would seem natural to compare these two places. They are so similar in their setting and menu and clientale. Caffé Mio’s prices seem a bit lower if I compare similar pasta dishes. ($14 vs. $16.95). And overall, the vote for quality of food tips towards Caffé Mio as well. (Want to read about our Caffé Mio dinner?)

Zola’s has expanded from doing lunch and dinner to providing a breakfast experience as well. Not a bad idea for holding a business meeting at the top of the day. They still have their takeout counter and also do catering.

We will be back again sometime when we need another trip down memory lane and with any luck we will see ‘our lady’ when we return.

Do you have a place that somehow became a regular spot over the years?