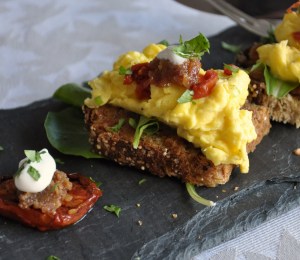 For today’s mid-morning feast I used my homemade bacon jam in a modern day version of smørrebrød, Denmark’s open-faced sandwich. Although there are dozens of very traditional and precise constructions for smørrebrød, I have had a hard time sticking to conventional recipes.

One food blog I read faithfully is Danish Open Sandwiches (Smørrebrød) by Marcus Schioler. It is out of Montreal of all places and showcases many classic recipes of the beautiful things that go into architecting authentic smørrebrød. I am in awe at the food work he has done on the blog in just one year. It really is impressive. And inspiring.

Tending to just go with what’s on hand, tastes that I think will work and a look that is attractive, I have done my own ‘smørrebrød’ thing when I load up layers on a sturdy bread base.

Perhaps my favourite post by Marcus would be a recent one titled New Nordic Open-Faced Sandwiches. Marcus frees me from my guilt of being reckless in my smørrebrød build. In this post, Marcus details the New Nordic Cuisine manifesto and I find out I might be okay. The most important thing to keep in mind though is to source your food locally. Already a mantra in our home, I think I am reasonably safe.

So how did I get to making bacon jam? Bacon jam is not typical Danish fare. You won’t find the recipe in the century old Frøken Jensens Kogbog. However, the Danes do love bacon and it often shows up on smørrebrød in some form – the rendered lard as a spread or the crisped bacon as a layer or a topping.

Throughout 2011 I kept hearing the phrase ‘bacon jam’. Anything bacon is good, right? But what really is bacon jam? What makes it jam? Is it made with fruit? My curiousity was piqued.

Then I finally tasted it. Two presentations at Savour Stratford’s Tasting Tent event incorporated bacon jam into their dishes. Chef Nick Benninger of Nick and Nat’s Uptown 21 in his 5 way “Porkapoluza” and Chef Sean Collins & Greg Kuepfer of Pazzo Ristorante as a topper on their arincini balls.

Shortly after that spectacular experience, I was reading that Skillet Street Food‘s bacon spread was being showcased at Toronto’s All The Best Fine Foods where owners are supporters of the local food movement. (Though, interestingly, Skillet Street Food is American.)

But the craze doesn’t stop. Since those jarred beauties have been tucked away in my fridge, a fellow food blogger, Kelly Brisson, demonstrated her bacon jam creation on a local morning show. Loblaws grocery chain is also on the bandwagon with their President’s Choice Black Label Bacon Marmalade.

My prediction? Expect to see more applications of bacon jam out there in 2012. Perhaps a North American focused condiment for now. Let’s see if this trend takes hold around the globe.

May I present my Breakfast Smørrebrød – Bacon Jam meets The New Nordic Cuisine. 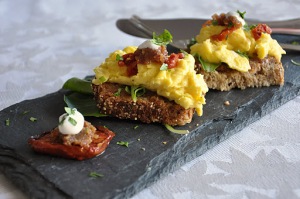 BACON JAM
Adapted from recipes by Martha Stewart and @Yzhalia

In a large skillet, render the bacon over medium-high heat. It is easier to do it if the bacon has been cut into chunks first. You want the bacon to be cooked but not crisped. Remove the bacon pieces from the pan and drain on paper towels.

Pour off the the rendered fat. But don’t discard. It can be kept in the fridge and used for other purposes. (Wonderful for the preparation for hash browns for example. A Dane will love it as a spread on rye bread.)

Using a tablespoon of the fat, sauté the onions and garlic until the onions are translucent. Add the apple cider vinegar, brown sugar, maple syrup, port and molasses and bring to a boil, deglazing the roasty bits of bacon (the ‘fond’). After a few minutes add the bacon.

Pour the bacon stew into a Dutch oven if you have a very low simmer on your cooktop or a slow cooker set to high. Leave uncovered. Cook for approximately 4 hours until the liquid is very sticky and syrupy. It may take less time in the Dutch oven.

When you think it is done, transfer the bacon stew to your food processor and pulse it until you have a consistency that leaves small pieces but is not a purée. If you feel it is too runny, return it to the skillet and bring it to a boil for a few minutes. With the sugars in the mixture, it won’t take long to thicken. When you use it, you don’t want it to ‘run’. It should be the consistency of a ‘jam’.

Fill sterilized 125 mL jars to 1/2″ from the top. Seal with lids and rings that have been scalded. Keep in the refrigerator for up to a month.