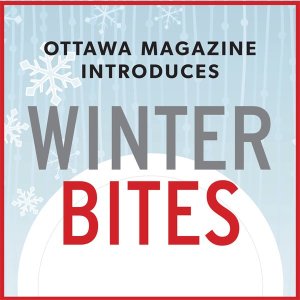 Ottawa Magazine has teamed with local restaurants in the deep of winter to promote their good eats by offering 3-course prix fixe menus for lunch and dinner (some establishments are only doing dinner). The promotional period runs from Thursday, January 12th through to the 28th.

I have been tracking this event out of the corner of my eye since it was first announced at the end of October. At first, I was quite ‘beige’ to the idea. Always weighing the value proposition, I needed content to get me to commit. That crisp, fresh, snappy blue, white, grey and red logo kept me watching as new news rolled in.

Eventually the list grew and the tweets began to stream. Winter Bites is now up to 29 participating restaurants. By contrast, Toronto’s Winterlicious event started with 36 restaurants in their first year a decade ago. They are approaching their 10th year as Winterlicious kicks off at the end of the month. They are now up to a whopping 175 participating restaurants. By that measure, Ottawa’s first year of Winter Bites appears to be a success.

So why on earth would I do it? Why would you do it? Who eats out in January?

So what do I need to actually commit and make plans?

Naturally, I have seen a lot of repetition on the menus so far, as ‘winter fare’ is popular now. And that’s okay. It gives it all a competitive feel. Perhaps a chance to crown the best crème brûlée in town.

Probably the easiest way to peruse the many menus is to go to the Winter Bites Facebook page and cruise through the images in their wall photo library. This has been so helpful for me to start my Winter Bites battle plan.

Winter Bites is here to take a bite out of Ottawa’s winter. Are you making plans to be a part of it? I would love to hear your picks and why!

3 thoughts on “Winter Bites Ottawa – Why On Earth Would I Do It?”